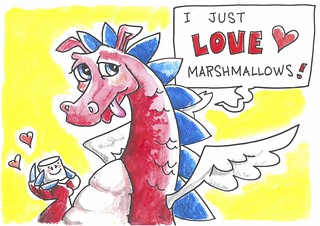 One day, Bob the Dragon bought every marshmallow in the world. But there was one problem. Marshie the talking marshmallow wanted those marshmallows herself, to draw faces on them.
Marshie was on Bob’s back, flying through the air to go to the shop. When they got there, they found out there were no marshmallows left. Only five, that were out of date. The shopkeeper screamed with fear, because she had never seen a dragon in the shop before.

The shopkeeper said, trembling, “What are you doing here?”.

“Get out of here before I call the guards!” the shopkeeper shouted.

“Don’t sass me,” said the shopkeeper. 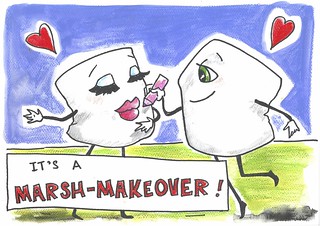 “I’m not leaving until you order more marshmallows!” screeched Bob.

“But there’s none left anywhere!” said the shopkeeper.

“What are those things under your desk there?” asked Bob.

“Oh them, they’re my midnight snacks” replied the shopkeeper.

“The catalogue said there were 150 marshmallows in the shop, I’m not leaving until I get them,” said Marshie.

“You’re not getting them until you pay me 160.000 euros!” she maniacally laughed, running out of the shop with the marshmallows under her arm...