The Adventures of Bitzy the Crocodile 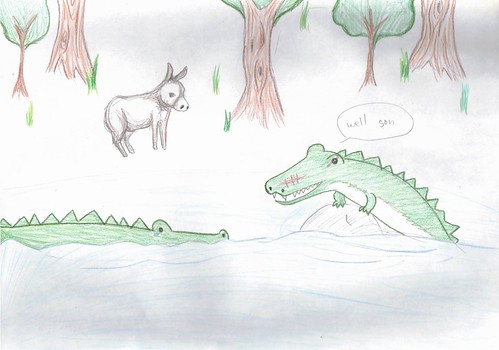 One day, Bitzy the crocodile was crawling through the forest. Peely Peely the donkey was hanging from the branches of a tree.

“Can you guide me to the nearest swamp?“ asked Bitzy.

“Yes! I will guide you to the nearest swamp,” Peely Peely replied.

So Peely Peely climbed down the tree and they both went to the nearest swamp.

On the way, Bitzy asked, “Can you please tell me how to become an alpha male to become a leader?”

Peely Peely replied, “No, I don’t know much about being a leader.”

They were nearly at the swamp at this stage.

They passed a small pond and Bitzy saw some goldfish and got scared.

He jumped on to Peely Peely’s back. They both fell over into the pond. Bitzy cried, “Ouch!”

Bitzy crawled out of the pond as fast as he could and apologised to Peely Peely. He was still scared. 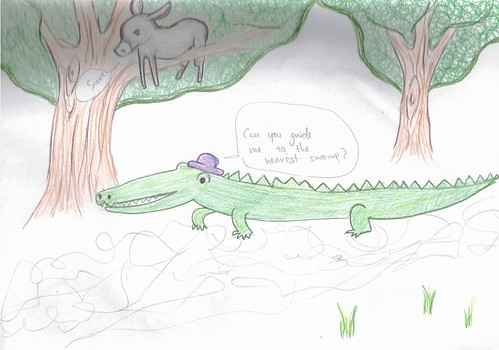 Bitzy knew he had to get to the the swamp quickly but realised he had lost Peely Peely.

All of a sudden, Bitzy felt really afraid. Peely Peely was looking for Bitzy, but he went into the opposite direction.

Bitzy found the swamp, and lowered himself into it. He saw Peely Peely talking to the other crocodiles.

Bitzy approached Peely Peely and asked, “How am I supposed to become a leader if I am afraid of goldfish?”

Peely Peely wanted to bring Bitzy back to the pond so he could face his fears.

Bitzy says “Okay, I will go there - I will try not to be scared, but I don’t think I can.”

While he was slithering out of the swamp, Bitzy caught sight of his great grandfather, the old alpha male…