The Adventures of Fluffy the Unicorn 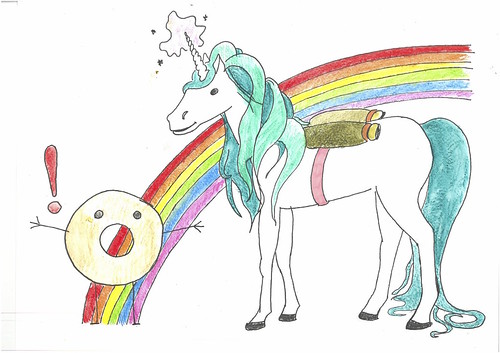 Fluffy the unicorn was in St Anne’s Park with her best friend Jimmy the walking bagel. They were testing out their new jetpacks, the B6-2000.

Jimmy’s jetpack malfunctioned, but Fluffy saved him -  Jimmy landed on her horn. After she saved him, a rainbow came out of her horn.

“That was so cool,” said Jimmy.

Fluffy lived in the stables in Candyland. The only way to get to Candyland was to go through a special tree in the park with a portal.

When she got home, Fluffy wanted to show her mum and dad that she could make a rainbow with her horn. She tried and tried but it didn’t work.

“Right,” said her dad. “I’m sure you really did make a rainbow.”

Fluffy knew her parents didn’t believe her. She went to her room and cried jellybeans. That night Fluffy had a nightmare about walking doughnuts.

Two weeks later, it was Halloween. Fluffy dressed up as a dolphin wearing a princess dress, holding a pizza. She carried a bag shaped like a cupcake for her sweets.

Jimmy knocked at the door. He was dressed as a doughnut. He was wearing pink icing, sprinkles and a cherry. 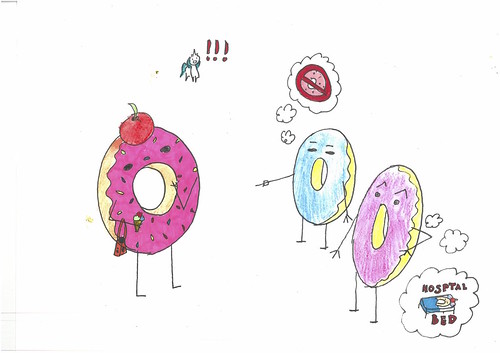 Fluffy got such a fright that she ran away – she remembered her nightmare. Jimmy was sad that he had frightened Fluffy and he cried skittles.

Jimmy was so upset that he broke his best friend necklace he shared with Fluffy. He went to find an ice cream to cheer himself up. Two bullies -  Greg and Fred, the real walking doughnuts -  came up to Jimmy.

“Hey dude, who do you think you are? You’re such a loser, you don’t look like a doughnut. Give me all your sweets,” said Greg.

Meanwhile, Fluffy came home and found the necklace on her doorstep. She knew Jimmy was in trouble.

Fluffy searched for Jimmy and found him with the two bullies at the ice cream stand. She was afraid to save  Jimmy from the two bullies because she was so frightened of walking doughnuts.

“I’ll have to get over this fear to save my friend,” she thought…