The Adventures of Monty Dublin 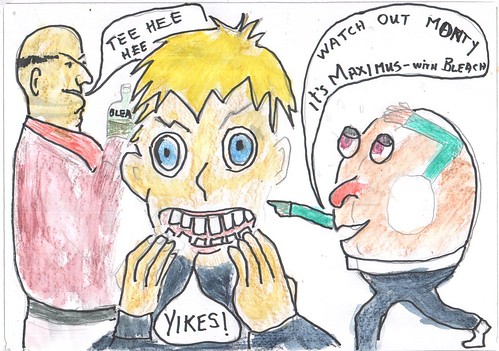 One Sunday evening, Monty Dublin was sitting on his couch watching the World Cup.

Monty noticed he was sitting on his best friend, mouldy Buttered Bagel.

At that moment, his father came down the stairs in his sunflower costume.

He started screaming before running out the door onto the street! Monty didn’t really care, so he continued watching the World Cup.

The Bagel was telepathic and told Monty what had happened to his father.

“I’m pretty sure your father used bleach instead of shampoo,” said The Bagel. “That would explain his screaming and running out of the house!”

“I don’t really care,” Monty told him. “This is a thrilling match between Morocco and Iran. The score is nil/nil!”

“Five minutes before your father went up to have a shower, Mr. Maximus, your teacher, replaced the bottle of shampoo with a bottle of bleach,” explained the Bagel.

“No!!” Buttered Bagel screamed as Morocco finally conceded a goal.

When the match was over, Monty went out to find his father. He eventually found him in the toilets of the Dead Horse Bar drinking root beer.

As Monty dragged his father out of the bar, he saw Charlie Ireland striding down the street towards him…