The Adventures of Norbert and Rainbow 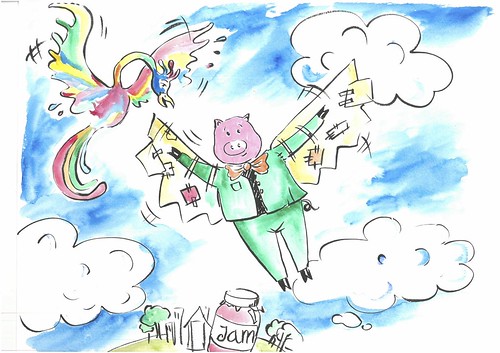 Norbert the pig lived on a farm. He had a best friend called Rainbow the multi-coloured phoenix.

Now this was no ordinary farm. It was called the Jam Farm because a very large jar of jam was found after the farmer passed away.

One day, Norbert and Rainbow decided that they wanted to go to a deserted island.

This was no ordinary island. It was the magical castle of the witch Pauline. She owned lots of magical creatures that lived on the island. There was a legend that, lurking in one of the dungeons, lived a beautiful Pegasus.

Norbert’s greatest wish was to become a Pegasus, so he really wanted to meet it. Everyone knew that this Pegasus liked jam, so Norbert and Rainbow decided to bring the jam from the farm with them.

“The only problem with bringing the jam is that it’s too big to carry it!” Norbert said to Rainbow.

“Well that’s okay! We just need to get lots of smaller jars to bring the jam with us!” said Rainbow.

But first, they needed to get the jam from a pitch-black cupboard. Norbert’s greatest fear was the dark, so when they opened the cupboard door, he got so scared that he ran away. Rainbow looked inside the cupboard and, to her surprise, the jam was gone…