The Adventures of Sally and Finbar

Once upon a time, not long ago, in Bad Sussville, Finbar the frog, got locked up.

His friend Sally the duck got him released and in return Finbar  lent Sally his phone.

Sally was loving the phone until she realised she couldn’t afford the bills.

She was looking for money when she dropped the phone and quacked it!

She made up a lie that the dog, Jelly bean, had eaten it.

She looked out the window and saw Finbar coming down the mountain towards the house. 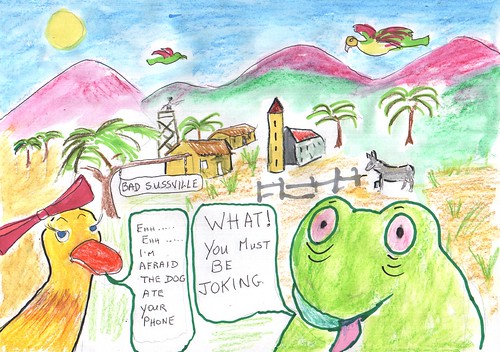 He rang on the doorbell and she went out to meet him.

“Do you have my phone” asked Finbar the frog

“ My dog was starving, we had no food so I fed him the phone”

“ Could you not give me the money”

“No, he needed the Snapchat filter”

“Ah, mm, oh yeah, that was a joke”.  Sally started to break down in tears.