The Adventures of Sprinkles the Dohnut 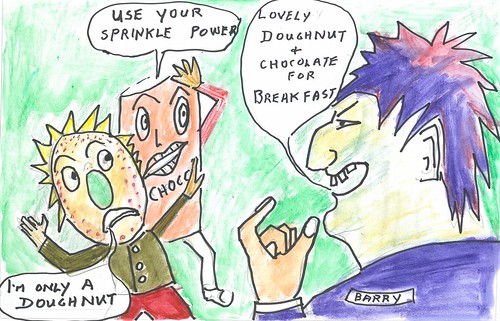 Once upon a time there was a dohnut called sprinkles. His biggest fear was to be eaten by a giant called Barry.

One day sprinkles the dohnut was walking outside with his best friend choco the chocolate bar when barry came along.

When barry walked down the streets the roads cracked in half.

Barry picked them up but just as he was about to eat them a car tripped him up and he through them into the desert where they got lost. “What are we gonna do?” Sprinkles shouted.

Choco stayed silent he was starting to melt in the desert heat. Just before he melted they saw a bowl which had been left there by another person who had got lost.

Suddenly sprinkles realised that the water he’d emptied onto himself out of the bowl was magic water.