Skip to main content
Home Stories After All These Years

After All These Years 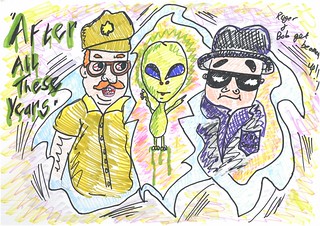 One morning Bob Brady was working in the police station sorting out his files. He got a phone call. It was a mysterious voice.

“You have 24 hours to solve this mystery and figure out who is calling or else...”

Bob panicked, he went white like a ghost and was really worried. He decided to ring his best friend Roger, who was a secret agent.

“I need help!” Bob said in a sad and squeaky voice.

“What do you expect me to do?” replied Roger.

“Well, you’re a secret agent so I expect you to help me in the investigation,” said Bob.

“I’ll meet you in twenty minutes,” said Roger - but it was two hours later before he finally showed up.

The two friends started by listening to a recording of the phone call. They were looking for clues but it was a mystery.

In the background they could hear some noises, definitely traffic and maybe some footsteps as well. They also heard a strange bing bell.

The bell sounded very familiar to both Bob and Roger. It sounded like an old church bell from the village they had grown up in. They decided to investigate further. 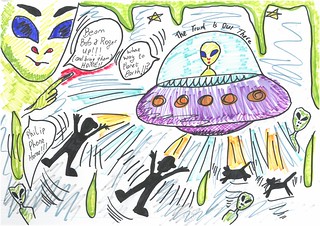 “I think we should head back to the old church,” said Roger.

The next morning, at the crack of dawn, the two friends drove a Jeep back to the village. They decided to search the building and found photographs of Bob all over the walls. There was traces of icky goo on the pictures.

Just then they heard some whispering and a voice saying “Bob” in a very quiet voice.

Bob was scared and started to scream. Roger turned to run away but he stepped on a rake and it smacked him in the face. There was icky goo on the rake too.

Suddenly Bob recognised where the goo was from.

When he was younger, as a child, he used to play in a tree house with his alien friend. Bob smiled and when he turned around he saw his old friend, Philip the alien. It had been 18 years since they had last seen each other.

Just then, Roger woke up but when he saw the alien he passed out again.

“I see you finally answered my phone calls,” the alien said.

“That was you on the phone all that time?” Bob said surprised...