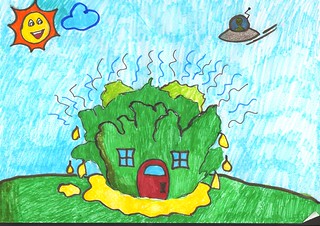 A mink named Larry opened his eyes and was on Mars. Mars looked like a green out-of-date cheese puff crawling with spiders. “Now that’s breakfast sorted’’ Larry thought to himself as the spiders crawled by.

Jojo the zombie, his best friend and mentor for synchronized swimming, roared “Hello! Can I have some spiders? Let’s go swimming!’’

Jojo and Larry got ready to go and jumped on the spaceship bus that looked a miniscule cheese-puff. When they got to the swimming pool everybody there looked like cheese-puffs. 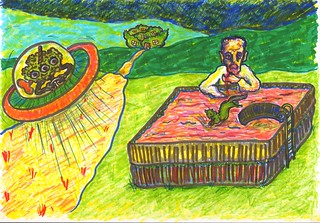 Larry jumped into the pool of strawberry yoghurt. It was pink, sticky, and smelled like rotten cheese. After a while, Larry got stuck and Jojo had to help him.

Jojo jumped in and said ”I’m a bit hungry so I’ll eat all the yoghurt.” When he was finished eating all the yogurt, he pooped out yogurt flavoured candy. Larry then said, “Now my new bikini is destroyed! I have to find a swimming pool to practice my solo synchronized swimming!’’

Off they went to Frank the Alien’s house to ask if they could borrow his spaceship.

They were very nervous because they were terrified of Frank. 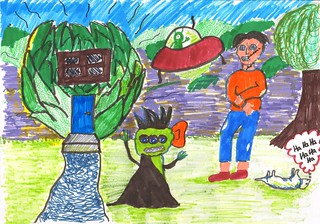 Frank had three eyes, loads of brains, one big orange ear, a unicorn horn, and a lisp.

Larry started shivering with the fear of meeting Frank and the feeling of sticky dried-in yogurt.

They arrived at Frank the alien’s house which was covered in moss, shaped like a cabbage, cheese dripping down the side, and smelled like wet dog.

They knocked on the door and Frank the Alien yelled “what do you want?!” Larry and Jojo rolled around laughing at Frank’s lisp. Frank got a hose and blasted them with Nutella and told them “never come back again!”

Without making a plan, Larry and Jojo sneakily stepped inside the door of Frank’s spaceship. They switched it on and Rock ‘n Roll music came on. They flew up into the sky and Frank yelled “I’ll get ye back!!’’