Angel the Cat and her best friend Siobhan 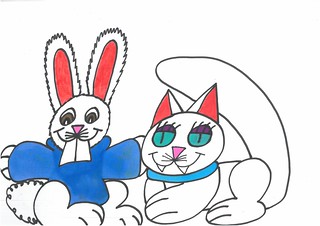 St.George’s National School, Balbriggan.3rd Class, 1st October 2015
Once upon a time there was a cat called Angel and a rabbit called Siobhan. They were talking about what they would like to do when they grew up.

Angel said “I want to be a model when I grow up.”

Siobhan said “I want to be a Rockstar Millionaire!”

The two friends were sitting on the bed in Siobhan the Rabbit’s house. They were talking for so long that they fell asleep!

They both had the same dream – Angel the Cat was a rapper and Siobhan wanted to be a rapper.

When they woke up they decided to go to rap school. 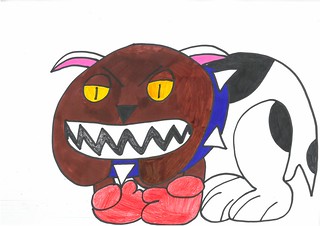 The Rap School was big. It was a blue and black building. Siobhan and Angel took a taxi to get there.
They saw that the walls were designed with pictures of famous rappers.

When the friends walked inside Angel saw Fionn the Dog. He was a Boxer Bulldog.

Angel was afraid. “I know him from Rabbit School”, she said to Siobhan.

“Hey, I remember that dog too – he was bullying us in school!” replied Siobhan.

The cat and the rabbit decided to hide. They ran to the toilet and locked the door.

After five minutes they knew they had to go to class. They hid behind one of the other animals as they went to class.

The teacher told the friends that they had to sit beside Fionn the Boxer Bulldog....!