Skip to main content
Home Stories Attack of the Monkeys

Attack of the Monkeys 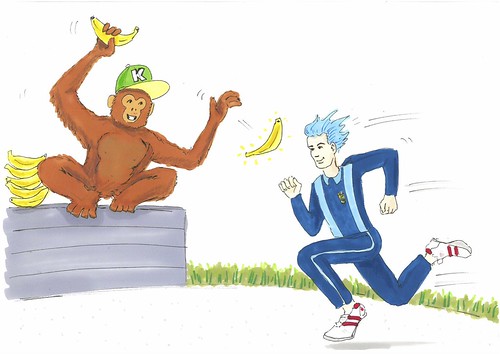 Once upon a time there was a boy called Jackson. He was hanging out at home watching telly when suddenly a bunch of evil monkeys attacked.

The evil monkeys were after Jackson’s store of bananas. Jackson had loads of bananas because they were his favourite fruit.

On the sitting room table there was a speed potion that Jackson was looking after for his dad.

One of the monkeys knocked it over and when it exploded it gave Jackson super speed powers.

Jackson didn’t realise he had super speed powers but he did want to get out of the house and away from the evil monkeys.

When he ran out of the house he noticed he was way faster than he used to be. He was so fast that he tripped on a rock and fell over.

The king of the monkeys was named Kyle. He was actually fairly nice. When he saw Jackson fall over he stopped all of his monkey minions from attacking and went out to help him. 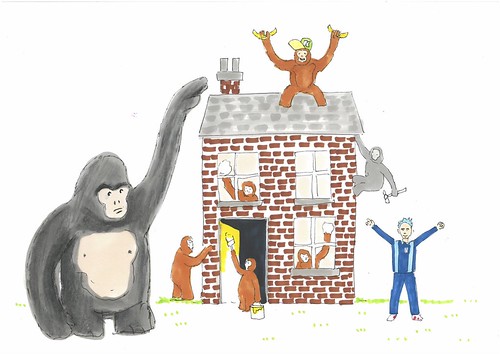 “I’m sorry about your house, I thought it was abandoned and we just wanted the bananas. We are very hungry.” Said Kyle

“It’s okay. How come I’m so fast all of a sudden?” asked Jackson

“The potion that fell on you made you really fast. Now you have powers,” said Kyle.

“Can you guys help me tidy up the house before my dad comes home or else he’ll be really cross with me?” asked Jackson.

Kyle and all the monkey minions helped Jackson put the house back together. But there was one part of the roof they couldn’t reach. So they called on Kyle’s dad, the gorilla to give them a hand.

Jackson was so impressed with what he saw that he asked Kyle “Can you guys help my dad make a potion that could turn me into a monkey and turn back into a human again?”...