The Attack of Nobby the Peanut 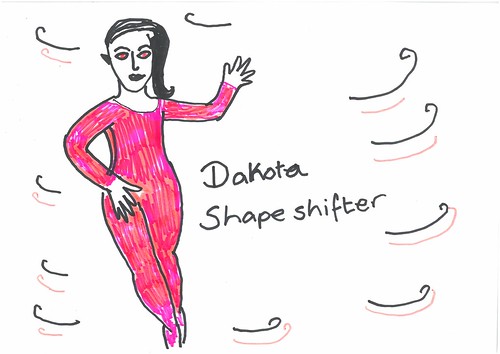 Once upon a time, long long ago, there was a shape-shifter named Dakota.

Dakota lived in a magical place that wouldn’t be visible to the naked eye.

Many magical creatures lived there. Her best friend was Jacob the Demon and Dakota took him everywhere she went.

Jacob had a dog called Timmy the Time-Traveling Troll. Dakota’s brother was very ill from an evil Energy Drainer named Nobby the Peanut, who had captured her brother in another dimension. Nobby the Peanut was slowly taking away his ability to teleport.

Dakota and Jacob were talking in the city one day.

“I hope that Nobby the Peanut doesn’t kill him,” said Dakota.

“Well, if you worry so much about him, go over the water around the city and save him!” said Jacob. 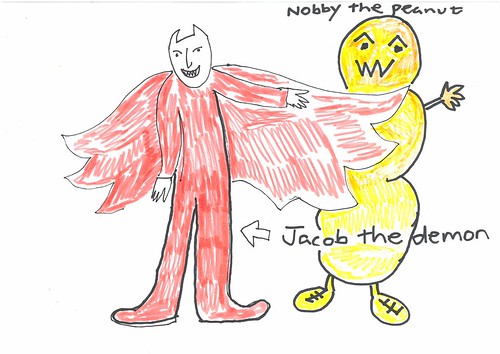 Dakota said, “No I could NEVER do that alone! I’m so afraid of Nobby the Peanut!”

Jacob offered to help along with his Troll Dog, Timmy. Jacob and Dakota decided to build a bridge using wood to cross the water.

As they were crossing the bridge, Jacob saw Nobby the Peanut and got so scared that he ran back to the city. Timmy wasn’t scared, so he stayed with Dakota.

Dakota thought for a while about what Nobby’s greatest fear might be. She remembered that he was afraid of elephants, so she shape-shifted into an elephant named Ellie. Timmy was then filled with fear so he ran back to the city as well.

Dakota was on her own.

Nobby the Peanut came towards her and broke the bridge. Dakota fell down into the water...