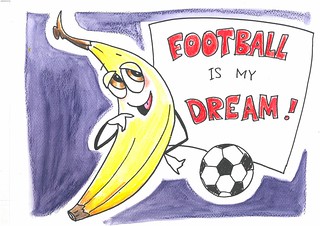 Once upon a time there was a Banana Man. He lived in a fruit bowl with his best friend, Dish. Dish was a half-donkey, half-fish.

“Oh Dish,” said Banana Man. “How come you can swim without drowning and I can’t?”

Banana Man knew he would have to train really hard to become a good footballer. Banana Man decided to go to a football club and train there. Dish was too busy swimming, so he didn’t go with him.

When Banana Man got to the club, he felt shy and nervous. He almost split his skin with nerves! Just then the coach came out of the dressing room.

When he saw how nervous Banana Man was, the coach said, “Don’t worry, follow your dreams, and never give up!” 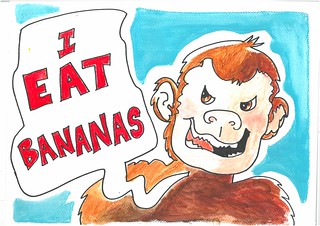 Banana Man really felt better and went out on to the pitch. The coach told Banana Man that first they were going to work on marking.

Banana Man knew he had to stay really close to the other player and be ready to tackle him if the ball came close.

But Banana Man suddenly realised who he was marking and he got really nervous again. A team of monkeys came out and among them was Mark the Monkey, Banana Man’s greatest enemy.

Mark the Monkey had a big bunch of monkeys and he was the leader of them all.

“I’m gonna be the man of the match,” said Mark the Monkey in a sassy way. “They’re going to call me Lionel Monkey!”