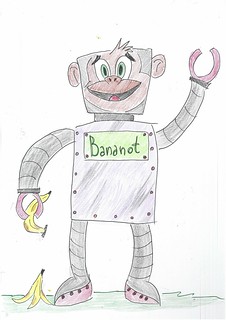 Banananot, the monkey in a robot suit, was at school.

While the teacher was on his coffee break, Banananot was trying to stop Chimpy the Chimpanzee from stealing Piggy the Pig’s pencil.

“My pencil with the piggy on top!” Piggy cried.

“Come back with my friend’s pencil!” said Banananot.

“Never!” said Chimpy and snapped the pencil in half.

Chimpy took the broken pencil and ran out of the classroom. Banananot chased after him. 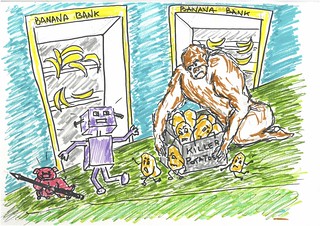 Chimpy ran into the storage room and he found a box marked ‘Killer Potatoes’. He opened the box and the potatoes roamed free.

Just then he saw the Killer Potatoes running and rolling towards them.

When Banananot saw them he thought, “I believe in myself! I can peel them and defeat them.”

Banananot reached into a container in his robot suit and pulled out a peeler to frighten the potatoes.

Meanwhile, Chimpy was running to the Banana Bank to steal the precious Banana Jewel. 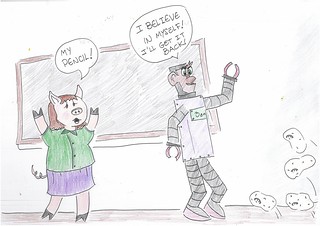 He used one half of the broken pencil to open the lock and get the jewel out.

Piggy knew that Chimpy loved bananas so she had followed him to the bank.

“What are you doing?” Piggy asked.

“None of your banana business! Go away!” said Chimpy.