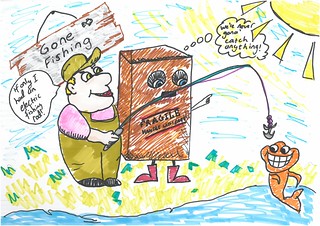 Barb the Fisher was walking to Alaska. He was on his way to the Fishing Olympics in hopes of winning the Electric Fishing Rod, the best fishing rod in the world.

On his way there, Barb bumped into Box Boy. Box Boy fell into the water and Barb had to fish him out.

There were lots of rocks in the water, so Barb had to be careful when fishing him out.

They saw that a fish had bitten off a part of his box. In the hole, there were a set of car keys. They discovered that they were keys to a black Lambourghini that was parked in the middle of the road.

That’s when Barb thought of a plan. 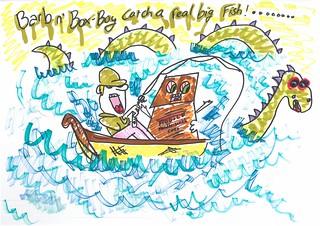 Barb would drive in to the competition in his black Lambourghini with Box Boy in the booster seat in the back. He would say to his arch-enemy, Dalff Frugenstein, “Like my new riiiiide?”

They drove on but realised that Dalff Frugenstein had an Aston Martin DB10 so they got really embarrassed. As Barb said, “Do you like my new ride?” he crashed his new Lambourghini.

When Barb crashed his car, Dalff Frugenstein started drifting around him with loads of smoke. When Barb and Box Boy looked behind them, the car was gone.

All that was left behind was a postcard of Dalff and the Electric Fishing Rod and a note that said, “HA HA HA HA!”

Then the competition began.  Both Barb and Box Boy said “Holy Shnykies!”...