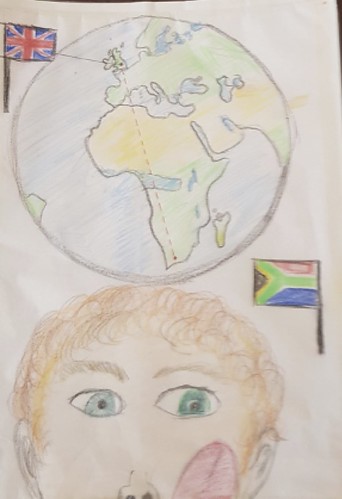 Boom! There I was in the Smiley Faces care home with all the other orphans, scrubbing the master’s dishes. I was with my friends, Marvin and Patrick.

“Did you ever know your parents?” Patrick questioned.

“No, my only relatives live in South Africa…I wish I lived with them” I said wistfully.

Once we finished, we had to do the laundry. Only then could we have supper.

IT WAS A DOG’S DINNER.  Cold and lumpy mashed potato, chewy beef and carrots so overcooked they were nearly liquid.

Although I slept little, I was never bored. Night time was our adventure ground!

Every night we checked if everyone was asleep. I gave the signal and we climbed out of the window and slid down the gutter, onto the lonely streets of London.

One night while out on the streets, I heard a strange noise.  It sounded like a dog whining but it was so faint I couldn’t be sure. I followed the sound for ages. Then I took a turn down a narrow lane and there it was.

An apricot coloured tail that looked soft and silky was poking out behind a bin. I picked up a stick to protect myself and cautiously creeped over to investigate.  It was just a small white dog wagging its tail.  I dropped the stick, this dog was no threat. He bounded over and I bent down to scratch behind his ears. Then he caught me off-guard with a lick on my nose!

I knew in that instant we would be great friends. I checked for a collar but he didn’t have one.

“I guess you’re coming back with me,” I chuckled.

When we got back to Smiley Faces, I hid the dog under the bed in our dormitory.

“I think I’m going to call you Larry,” I decided. I started to feel sleepy, so I got back into bed and instantly fell into a deep sleep.

Some time later, I was woken by a cold wet feeling on my cheek.  I swiped it away and heard a whine. I jumped out of bed fully awake – it hadn’t all been a dream!

The day dragged doing extra chores.  The minute lights were out,  Larry and I set off to search for better food.  My favourite hunting ground was at the back of the local Chinese take-away. I wondered if Larry would enjoy dumplings as much as I did. Surprisingly, Larry demolished them, licking his lips.

On the way back, I spotted a new magazine drifting down the road. I picked it up and started flicking through it. Something caught my eye. It was a record competition for a dog and their owner.

The best thing was that any winner would get £20,000.  “That's enough money to move in with my cousins!!!”  I couldn’t help shouting it out.

As soon as we got back to Smiley Faces, my friends came rushing over. I showed them the magazine.

Patrick was so astonished he couldn’t find his words.  “Yyyyy…….. You cou..cou could mo...move in with your cousins?” he stammered.

That night I dreamt about making the record and moving in with my …..

“WAKE UP YA LAZY LUMP !!!” a voice boomed in my ear. Those were the words I heard every morning.  I got out of bed as quickly as I could and started my chores.

That night I wondered how long I would be stuck in Smiley Faces. I looked at the magazine and it showed all the records you could attempt to break with your dog; ball kicks, popping balloons, jumping hurdles.  Then I spotted something that I liked the look of - skipping with your dog.

The problem was I didn’t have the £10 entry fee. I also didn’t have a skipping rope and didn’t even know if Larry could skip.

On our night time adventures, we always kept our eyes peeled for an abandoned skipping rope.  Weeks passed and we were starting to lose hope of ever finding one. This was going to be a challenge.

One day, a new boy arrived, introducing himself as Harry. His name suited him - he was plump and cheerful.

As he unpacked his rucksack, my eyes lit up when I spotted an old skipping rope amongst his ragged clothes. He said that I could borrow it to practice with Larry.

I thought that it was the moment of my life (although it really wasn’t). Later that night, my friends and I  snuck out to see if Larry could even skip.  Marvin timed us on his stopwatch.  We got to 41 on our third attempt.

I still hadn’t figured out where I was going to get the entry fee though... 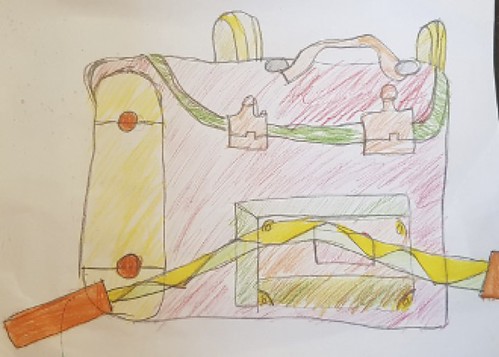 Returning home from one of our night time adventures, we met a kindly old man who bent down to pet Larry. I recognised him from his photo in the magazine. He was the competition host, Robert Henderson!

I told him my story and explained how I didn’t have the entry fee. He told us he had been an orphan too but had millionaire relatives that took him in as a child. He offered to waive the entry fee and meet us at the same place and at the same time in one week.

He also told us the current record was 58.

On the night, we nervously gathered at our meeting point. Harry, Patrick and Marvin came along to cheer us on.

“You did it- 60 skips!” my friends cheered.  Robert Henderson felt sorry for Harry, Patrick and Marvin.  He remembered being an orphan himself.  He offered to let them move into his Mansion with his private chef and servants.

No more disgusting meals or chores for any of us. Yipee!!!