Big Bob and the Bad Carrot 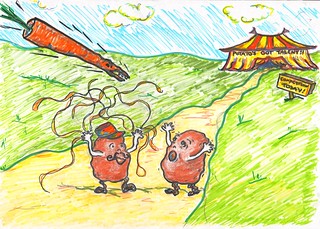 Once there was a potato named Bob.

Filthy-T the potato came out of his house and met Bob. Filthy-T and Bob the potato wanted to be on Potato’s Got Talent as a Pair.

They made a decision to sing “Uptown Funk. They lived on a farm and they sung to the calves. 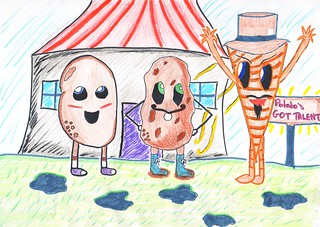 The calves enjoyed it and were dancing with each other.

They were throwing it everywhere and when they were tired they ate grass.

Big Fat Bill the potato-eating carrot saw them practicing and said that he would try to ruin their audition.

The next morning, a letter came from Simon Cow, inviting them to audition for “Potato’s Got Talent.”

When they went to the audition, Big Fat Bill the potato-eating carrot was in the front of the queue.