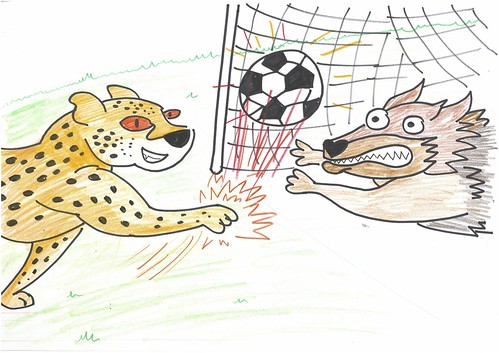 Once upon a time, in a faraway land, there was a cheetah called Dexter and a wolf called Wolfie. Dexter’s best friend was Poppy the unicorn.

He was just learning but he wanted to be the best footballer in the world.

One day, Dexter saw Wolfie wearing his football kit in the Aviva Stadium.

“What team do you play for?” Dexter asked.

“I play for the Chicago Wolves,” said Wolfie.

Dexter said, “I play for the Fast Cheetahs. We are going to smash you in the match.”

Wolfie told Dexter, “I’m too good. You will never beat me!” 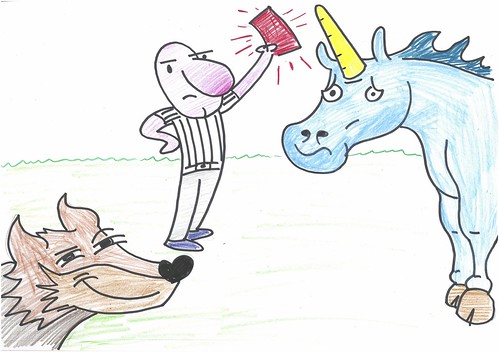 Dexter said, “No you’re not. Maybe in your dreams!”

Poppy came along to play with Dexter. Dexter and Poppy trained up for the match.

On the day of the match, both Dexter and Wolfie tried to score. Dexter started to feel worried.

Poppy ran and charged at Wolfie with her horn. The referee came over and put up a red card.  Poppy was sent off!

Dexter was trying not get Wolfie angry. Wolfie had an unbelievable temper! Dexter scored a goal and that made Wolfie mad.

He started to chase Dexter...