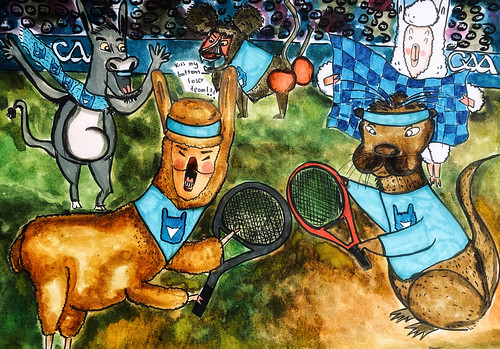 Once upon a time there was a Llama called Cornelius. He was from China and loved communism and wanted to help everybody.

Cornelius was a sailor and he came to Dublin by boat. His best friend was called Jeremy.

They were having a conversation, but Jeremy couldn’t speak because he was born a mute.

They spoke about saving up for surgery for Jeremy. They came up with an idea of organising a tournament in Croke Park to raise money.

Bigfoot had joined the opposing team. They didn’t know that Bigfoot was afraid of Llamas, especially Llamas that were big.

They were playing tennis. It was unusual play tennis in Croke Park but they wanted to see if people would enjoy it. 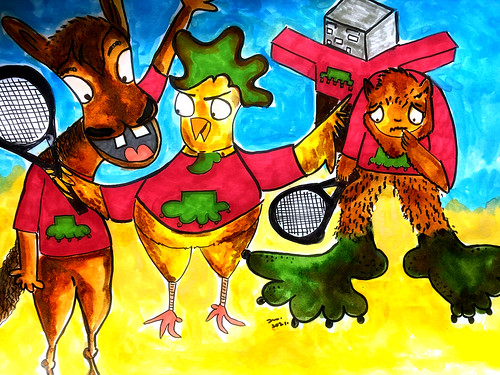 Stewie the groundsman got out of his cage and he was not very happy.

He hated animals on the pitch because they tear it up. Jules, from the GAA came and persuaded Stewie to allow the animals to play the match.

A band called The Living Kazoos started playing music. They played ‘We Didn’t Start The Fire’.

When the music started, there was a strange man running on the pitch. Stewie said, “Oh look, there's Steve.” Steve was the surgeon that was going to fix Jeremy.

He said he was going to make Jeremy speak, for free! The crowd went WILD!!

They decided to give the money that they raised to the Special Olympics.

After the surgery, Jeremy found out that he had an amazing singing voice.