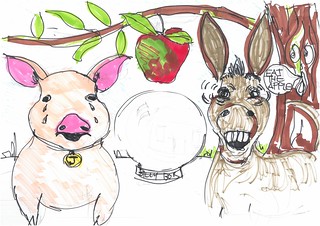 St Brigid’s Girls National School, Killester, 4th Class, 8 September 2015
Once upon a time there was a donkey called Billy Bob Joe. He lived on a farm.

One day the farmer was feeding Billy Bob Joe some grass. Suddenly, he bit the farmer’s hand accidentally.

“Ouch! That was sore!” screamed Farmer Dave. “That was bold.”

Billy Bob Joe felt sad and lost. He sat down next to an apple tree.

“What have I done?” said Billy Bob Joe to himself. “I have no home, I have no food, and nobody loves me.” 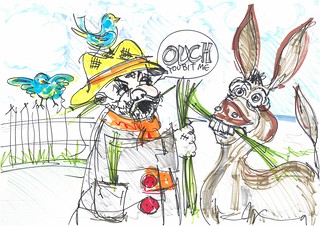 “You did nothing wrong,” said the apple tree. “It wasn’t your fault.”

Billy Bob Joe jumped with fright, and banged his head off the tree. A branch shook and an apple fell down.

“Eat the apple,” said the tree.
After Billy Bob Joe ate the apple, the tree said, “Now you have hypnotic powers.”

“What did you expect?” asked the apple tree. “I’m an enchanted tree who can talk!”

As Billy strolled through the forest, he met a pig who was crying.

“I’m Jennifer the magician, and my magic powers aren’t working,” said the pig. “My assistant left, and ever since he left my powers haven’t worked.”

“Well, I have hypnotic powers,” said Billy Bob Joe. “If that helps, we could work together.”

Billy Bob Joe and Jennifer the Pig decided to be partners, and organised a magic show...