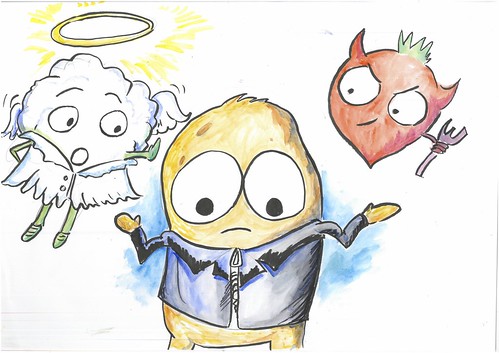 Once upon a time, there was a potato named Billy Bob Joe III, or BBJ3 for short.

He lived in a village with a lot of food neighbours. The village was beside a huge city called Foodtopia. BBJ3’s best friend was Sam the quarter pound cheeseburger.

There was a large famine in Foodtopia, so all of the foods in the village had to search for crumbs to eat.

One day, BBJ3 decided to go outside to look for food and brought his new leather jacket with him. In front of him was a large pool of deep frying oils that was about to dry up.

“That frying oil would make me look even more delicious,” BBJ3 said to himself. Ever since he was planted, his dream was to be turned into chips.

All of a sudden, beyond the pool, he saw a large Tesco van. He thought he heard his friend Sam’s voice coming from within the van. 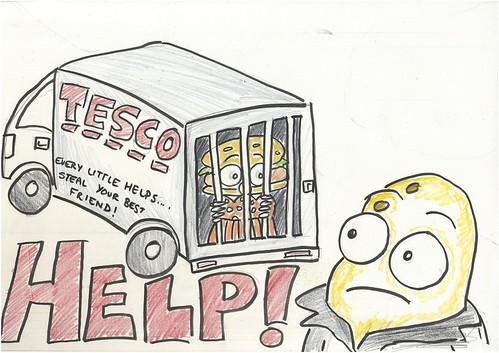 “Help me! They’re going to eat me!” Sam cried out.

He had a choice to jump into the pool or save his friend Sam.

Suddenly, two vegetables -  an angel cauliflower and a demon beetroot -  came to sit his shoulders.

“Jump into the deep frying oil. It’s what you’ve always wanted,” said the demon beetroot in a crooked voice.

“Don’t listen to him! Save your friend!” screamed the angel cauliflower.

BBJ3 had to decide, because the Tesco van was starting up and Sam would be packed up and sold for cheap...