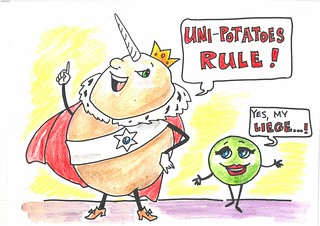 Blah, King of the Unitatos, went on a mission to find the marshmallow castle guarded by marshmallow dinosaurs.

Blah was on his marshmallow dragon that could spit out hot caramel. While riding his dragon, he stopped to eat a s’more at a petrol station.

When he came out of the petrol station, his dragon was gone, but he met his friend PJ the Pea. “Have you seen my dragon?” said King Blah to PJ.

“I want to eat King Brussel Sprout,” said King Blah, “but I’m afraid to because it would make me sick.”

“How about we just go up to him coolly and ask for your dragon back?” asked PJ. 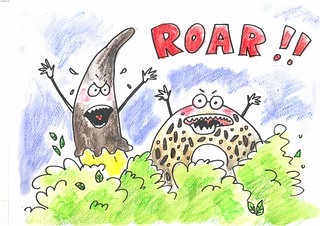 At that very moment, just as King Blah was going to answer, chocolate covered bananas and chocolate sprinkled doughnuts jumped out from behind a bush and told them, “ You can’t do that because we’ll capture you! And you’ll never be able to get your marshmallow castle that you’ve always wanted!”

The bananas and doughnuts flew away on giant dragonflies.

So then they went around the town to get volunteers to sign up to the army. A guy called Bob gave them his Millennium Pigeon.

It turned out that Bob was working for King Brussel Sprouts and the Milennium Pigeon brought them to the chocolate cauliflower dungeon...