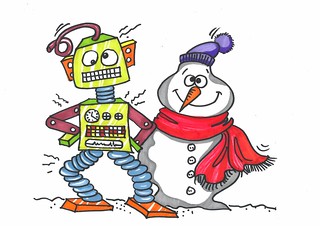 Our Lady Immaculate Junior National School, Darndale, 2nd Class, 29th September 2015
Once upon a time, Bob the Robot lived in an evil forest.

He lived in a dragon’s cage in this forest. A dragon had captured him when Bob was on his way to his friend’s house to borrow an Xbox.

Bob was just a little robot. He was saved from the dragon by Ben the Snowman.

“Thank you for saving me!” said Bob. 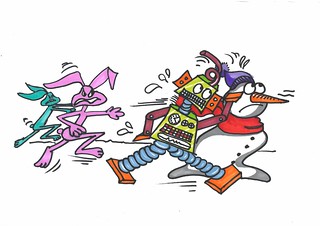 Bob and Ben went to the sea and they met a half-shark, half-man.

The Half-Shark Man asked the friends, “Do you want to go for a swim?”

After their swim, on their way back to the shore, Bob and Ben spotted something coming down the beach – Evil Bunnies!

“Help us!” shouted Ben and Bob.

Bob the Robot was afraid of the evil bunnies. He was afraid that they were going to bite him!

Bob started to rust while he was running away from the bunnies...