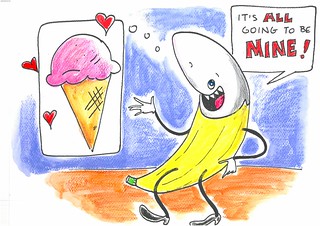 All of a sudden, Godzilla came down from a cloud!

Luckily, Jimmy the Square Banana Shark had his banana gun at the ready. He shot the half a banana in Godzilla’s face.

Then Godzilla picked them both up. Jimmy shot the banana gun again and Godzilla dropped them both and chased after the half a banana because he wanted to eat it!

“Let’s go!” said Jimmy and Bob to each other. 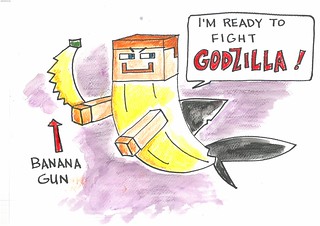 “Oh no, we’re in the Amazon rainforest,” said Jimmy.

They got out the biggest torch in the world so they could see through the jungle.

They found an ice cream truck in the jungle and inside was a fridge and a recipe for ice cream.

They walked out of the ice cream truck, looking for ingredients.

They sank straight through the pit like it was quicksand and fell into a dungeon...