Bobby and the Bad Barber 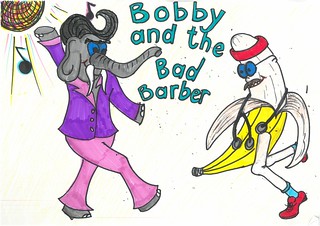 “Hey, join the club!” said the Hippo Harry, the leader of the gang.

“You need to a test first, snip snip,” said Filbert the Hairy Crab.

“I’d love to do it,” said Bobby the Disco Elephant, ‘but I’m too busy with my friend Dr Martian the Sprinting Banana.” 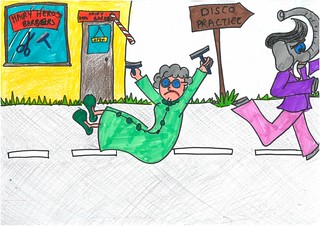 Meanwhile, Dr Martian was helping an old lady across the street. When he heard Bobby saying his name, he was there in a matter of seconds.

Elvis the Hairy Pickle asked, “Yo, when did the banana get here?”

Dr Martian had ditched the old lady in the middle of the road.

She swore vengeance on The Hairy Heroes and she took out her razor and walked backwards into the dark barbershop.

Bobby then realised he had forgotten disco practice. He rushed off just before he missed learning a new move called washing the windows.

When Bobby got home, The Hairy Heroes were in his house and were ready to tell him the test…