Bob’s Adventure in the Time Machine 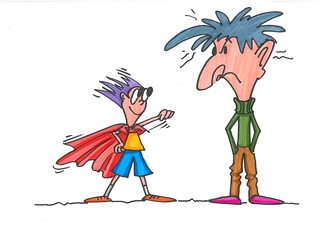 ​Scoil Mhuire, Shankill, 2nd Class, 1 October 2015
Bob the Cranky Man was on the train on the way to the Dublin airport. He was going to Australia.

Bob the Cranky Man was pushing everyone on the plane. He was really cross because there were no peanuts on the plane. The pilot pushed him out the window.

Bob the Cranky Man was saved by Denis the Boy Superhero. 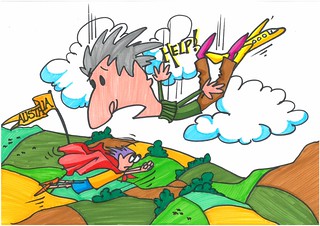 “I want to go to Australia! Now!” shouted Bob.

“If you don’t start being nicer, I will throw you into the sharks,” said Denis.

Denis and Bob flew to Melbourne. Bob’s secret lab was in a tunnel under the dinosaur exhibit at the zoo.

“I’m going to build the time machine to go and meet the dinosaurs. Do you want to go with me?” asked Bob.

“I want to go, please. I can help you to build the time machine because I am a superhero!” replied Denis. He had super powers.