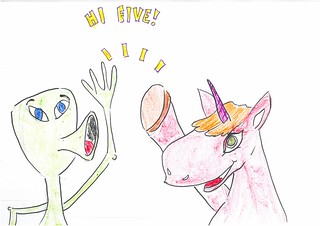 He flew up to a rainbow to eat some candy grass when suddenly he fell off the rainbow and onto Jaffa Cake Mountain.

“I wish Zerzu were here,” cried Billy after wandering around the mountain.

He was feeling lonely because he thought there was no one there.

A huge broccoli stalk came from around the corner of a Jaffa cake. From behind him, Billy heard someone say, “GUMMI, GUMMI, GUMMI.” 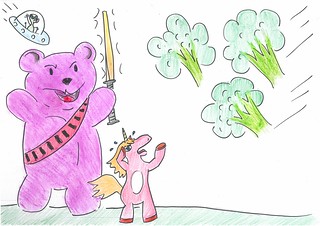 Billy turned around and saw a giant gummi bear with a marshmallow light saber.

Meanwhile, Zerzu the Alien was cruising around the Milky Way in his UFO when he saw his best friend Billy in trouble on Jaffa Cake Mountain.

Zerzu tried to suck Billy onto his UFO, but he accidentally sucked up the gummi bear instead.

One of the gummi bears accidentally pressed the Big Red Button that should never be pressed.