The Bubbliest Bubble of All Bubbles 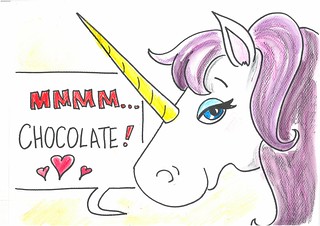 Bubbles the unicorn was in a meadow full of flowers. She was picking flowers for her best friend, Smelly the unipenguin.

At the party, Smelly was angry. 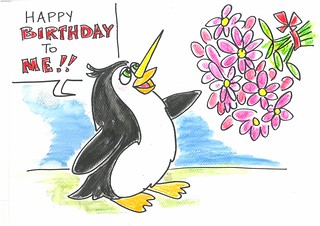 “Bubbles is late!” he said to himself. “She’s probably daydreaming in the clouds again.”

Bubbles suddenly realised the time and flew to the party.

When she got there, Smelly was blowing out the candles on his birthday cake.

“I wish Bubbles was here,” he said sadly.

“I’m sorry I lost track of time again. I was picking flowers for you,” Bubbles said.

Smelly and Bubbles lit the candles again and blew them out together. 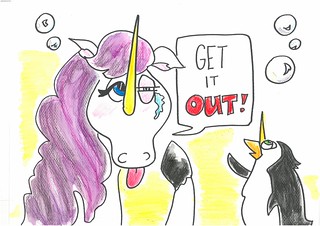 The next day, Bubbles and Smelly were playing with Smelly’s favourite present, a big tub of bubbles.

Bubbles blew the biggest bubble and it popped in her eye.

She squealed and started yelling, “Get it out! My eye! Get it out!”

“It’s not a laughing matter. Leave me alone, I’m going home,” Bubbles said, crying. She flew off with her eye swollen and sore. 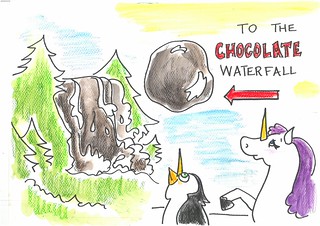 Bubbles and Smelly’s parents didn’t like them fighting. A few weeks later, they came up with a plan to get the friends back together.

Bubbles and Smelly were both sent to the chocolate waterfall to get some chocolate.

“What are you doing here?” said Bubbles, confused. “I’m here to get some chocolate for my dessert.”

“I’m here to get chocolate for my mam’s birthday cake,” replied Smelly.

Just then, a massive chocolate bubble appeared out of the waterfall, right above Smelly’s head...