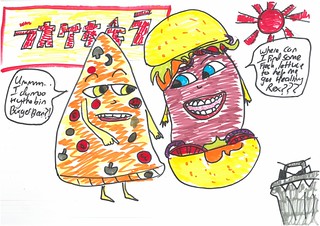 Once upon a time there lived a Burger Bean in Tokyo, Japan. Burger Bean’s best friend was Rex the half pizza, half human.

Many years ago they met at a restaurant and became best friends.

Burger Bean was a super big burger and he wanted to get healthy becuase he couldn’t see his toes. “Can you tell me how to get fit?” asked Burger Bean to his bestfriend.

Rex the half pizza, half human replied, “Run up and down the stairs and maybe eat some lettuce sometimes.” 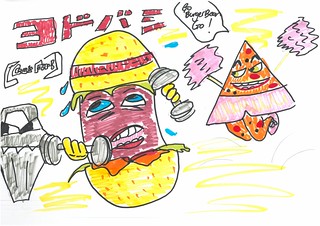 “Where are we going to find lettuce?” asked Burger Bean. “In the bin” said Rex with a smirk. He knew his friend had a fear of bins.

Burger Bean had always been afraid of bins becuase he knew food was sometimes thrown out.

Later that day, as he was watching Burger TV, he saw a commerical come on that said “Are you sick of being a big blob of food?

Join a gym and enter our competition: Survival of the Fittest Food!”

Burger Bean was excited to enter but he was also worried because he was afraid he wouldn’t be able to do it.

“I’ll help you get fit in no time!” smiled Rex. “Look, come on my training program!”