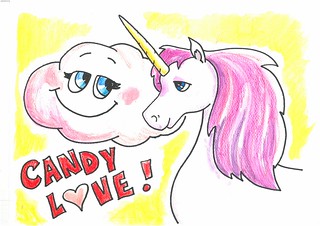 Once upon a time there was a unicorn girl called Candyfloss. She lived in Rainbowland with her best friend, Rainbow the Candyfloss Cloud.

Candyfloss’ biggest fear was that vegetables would rule the world and they would destroy Candy Planet.

She wanted to go back to CandyPlanet because she liked candy, her house was made of candy, and she missed her candy friends.

“Do you have a plan to go back to Candy Planet?” Rainbow asked. 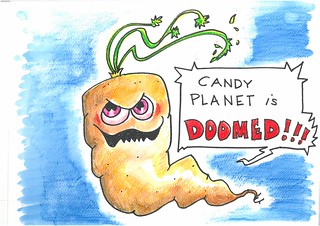 “How will we get past the vegetables?” Candyfloss replied.

Rainbow said she would teach Candyfloss to fly over the vegetables.

Candyfloss said, “We should dress up as vegetables.”

Rainbow screamed in terror, “But I don’t like vegetables!”

A few minutes later, the sky went dark and it started to rain vegetables. They knew it was Vegetableland because it smelled like vegetables...