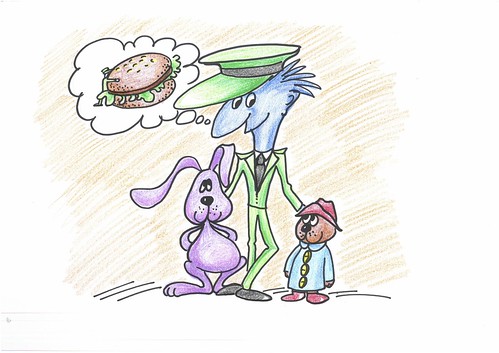 Captain Harry lived in a giant red house with his friends Paddington Bear and Pickins the Rabbit.

“Forgot about potatoes and chips, I want a burger!” said Captain Harry. “I’d like to go to California to find the world’s BIGGEST burger!”

The three friends hopped on an Airbus and it took them all day to get to Los Angeles, California.

It was too warm for Captain Harry and his friends when they arrived, so they decided to go for a drink.
They went to Starbucks and they ordered a cappuccino, a latte and an orange juice.

In the coffee shop, there was a man with black hair and a moustache.

“I’ll introduce you to my cousin, Scooby Dom,” said Scooby.

Captain Harry was delighted and he was smiling. They rented a big Toyota car and drove four hours to San Francisco.

They went over the Golden Gate Bridge and then left the car and took a boat at the harbour. Scooby Dom was a fisherman. 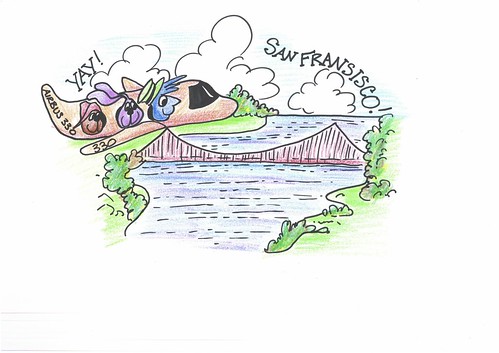 “The place to find the biggest burger is a restaurant called ‘Stir Fry,’ which is here in California,” Scooby Dom told them.

Captian Harry was getting really excited. Harry and his friends got to the restaurant at nine o’clock.

“Can I take your order please?” asked a waitress named Ann. She had brown hair and was wearing a uniform.
“I want a giant burger please!” asked Harry. “I’d like it with cheese, tomato, bacon, red sauce, and chips as well!”

The burger arrived on a huge plate that was carried in by two people. They placed it in front of Harry.

“You’ll be so full!” his friends told him, laughing...