Captain Sausage and the Golden Sausage 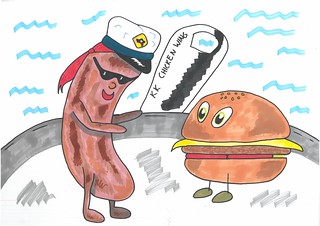 The Harold School, Glasthule, 2nd Class, 15 September 2015
Once upon a time there was a captain called Captain Sausage. His boat was a frying pan called the KK Chicken Wing.

His best friend was Big Mac the Burger, who was ginormous and very cheesy.

Sausage Kong, who was Captain Sausage’s greatest fear, lived on an island in the middle of the world where his ship was shipwrecked.

“I really want the Golden Sausage, but I can’t get back on to the sea because my ship Is broken.” 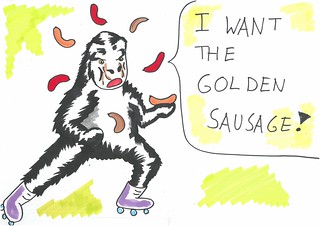 Sausage Kong chainsawed down some wood and used a hammer and some nails to mend his ship.

He was on his way to get the Golden Sausage! He was sailing so fast that he crashed into Captain Sausage’s ship.

Captain Sausage was so surprised that he screamed “Ahh!” and jumped off the boat and swam to an island.

Big Mac shot cheese at Sausage Kong as he was jumping from the ship.