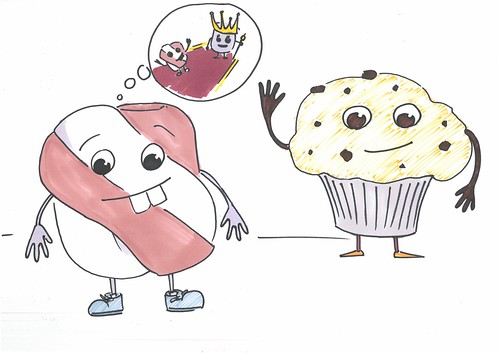 Donabate Portrane Educate Together National School, 3rd Class, 22 April 2015
It was just a normal day in the supermarket. Chubster the chubby marshmallow was in his house in Bag-Town.

Chubster was hiding from his enemy, Billy the Evil Banana. This was because once before Chubster had been captured by Billy.

(Billy the Banana works for the Ugly Apple.)

Over in aisle 2, lived Chubster’s best friend Mr Muffin. He was a bit squashed looking because one time he had accidently rolled out of his aisle and was stepped on. 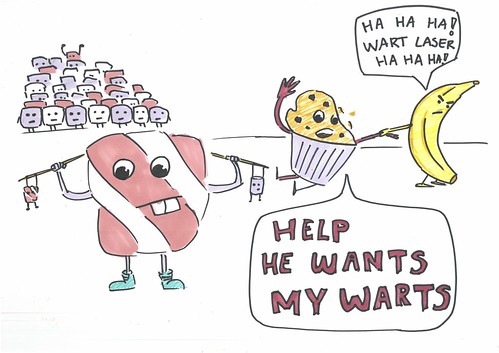 Just as Mr Muffin was trying to get up, he was kidnapped by Billy the Evil Banana!

Mr Muffin was feeling quite frightened.

The Evil Banana had kidnapped him to use his chocolate chip warts for a laser.

Meanwhile in Bagtown, Chubster was working out by lifting tooth-picks with tiny marshmallows as the weights.

He was preparing to make his own marshmallow army.

When he heard Mr Muffin’s cries, he rallied his army.

They rode towards the Ugly Apples’ Fort (a pile of crates) and approached the front wall...