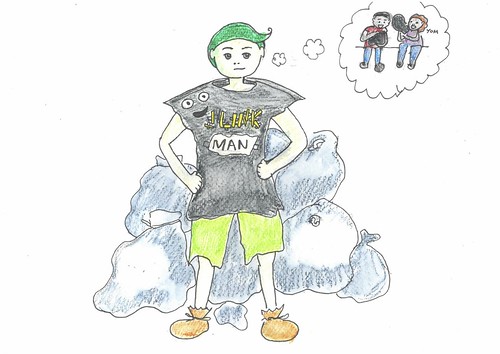 One disgusting day in the summer,  a cleaner opened a bin on the street in an alleyway and got sucked in.

He liked it in there a lot. He turned into Junk Man!

When Junk Man tried to get out of the bin, he fell over.

He caused chaos in the city – he spat garbage out of his mouth at the cars in the street.

“What happened to me?” Junk Man asked.

A garbage truck was driving down the street and and a bag of garbage fell out.

The garbage bag started laughing. Junk Man went over to see what was inside.

Junk Man took all the plastic from himself and ripped holes in the laughing garbage bag.

While this was happening, the garbage man from the truck put the laughing garbage bag back in the truck. 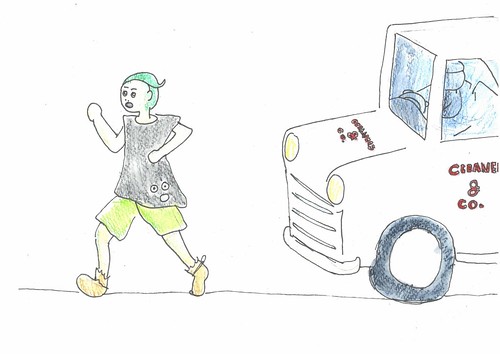 He ran towards the garbage truck, lifted it up, and smashed it. Junk Man found the laughing garbage bag, ripped it and then introduced himself.

“You will never take my friend away!” Junk Man told the garbage man.

The garbage bag said, “My name is Sacky. Thank you for saving me.”

Junk Man and Sacky became best friends. They ran around the city. Cleaners kept trying to stop them because Junk Man was spitting garbage everywhere.

A big cleaning truck chased them. Junk Man said, “I don’t think I can lift this big truck!”