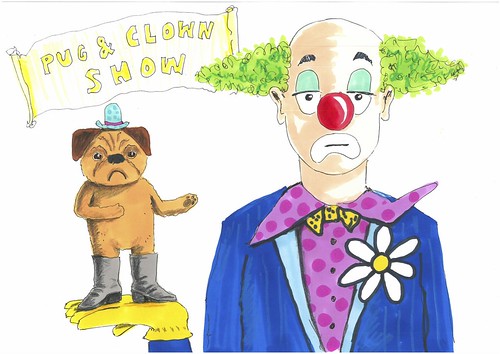 “Booooo,” shouted the crowd, after another bad performance.

The audience left and went to the No-Nose Clown Circus next door.

Mr. Squeeze-Nose the Clown sadly walked behind the curtain where his boss began shouting at him again.

Mr. Squeeze-Nose really wanted to quit his job. His best friend, Pug-Dog in Boots, tried to talk him into keeping going.

“Woof-woof! Cheer up,” said Pug-Dog. “I’ll get you a new packet of face paint and a new nose.”

“Aw thanks, Pug-Dog,” replied Mr. Squeeze-Nose. “You can give my old nose to my twin, No-Nose.” 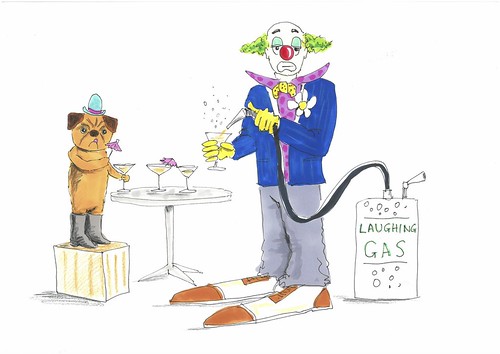 “Are you, woof-woof, having a laugh? Your brother’s evil. And besides, we need to focus on setting up our own circus...

The Pug & Clown Show! To reach our ambition, we have to keep going,” Pug-Dog said.

With all the distractions of the bad performances, Mr. Squeeze-Nose had forgotten about his dream.

He knew he had to make some money first, however, and so he set up a lemonade stand, selling the funniest lemonade around. He put a tiny umbrella in each glass but what really made the lemonade special was laughing gas.

Suddenly, however, Mr. No-Nose appeared back on the scene...