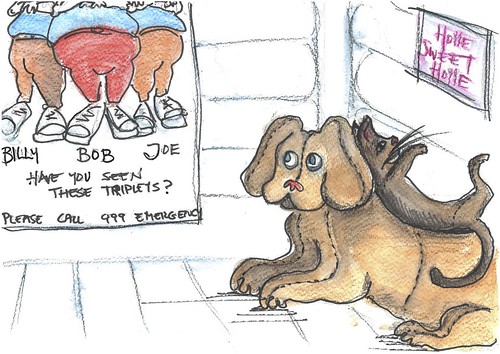 Snort woke up in his chocolate tree log in a chocolate forest.  He looked out the window and saw chocolate all around him.

It was all melting.  He jumped up to tell his best friend, Kit Kat, the chocolate cat.

Kit Kat was in the chocolate tree next to him.

Snort looked out the window and saw the fat triplets with hair dryers melting everything.

The Fat Triplets found where Snort and Kit Kat lived on Google maps, after searching for ‘Chocoville’.

Snort tried to climb up the tree that Kit Kat was in but Kit Kat meowed and ran further into the tree.

The flake in the middle of the tree broke and the tree started to fall down. 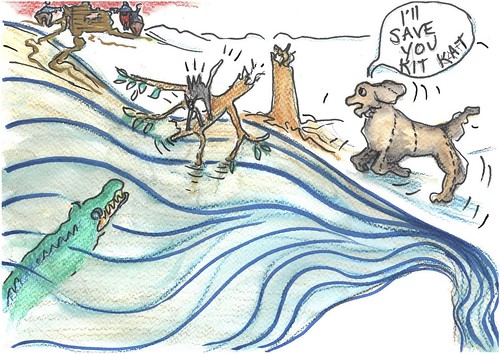 Snort jumped from the tree and landed on a marshmallow.

“Kit Kat is still in the tree”, Snort thought to himself.

By this point, the collapsed tree had begun to float down the chocolate river and a mint alligator climbed onto the tree.

The Fat Triplets were floating on marshmallows but they were sinking because the triplets were too heavy.

Snort started barking as loud as he could to warn Kit Kat of the mint alligator on the tree.

In the distance they could see a chocolate waterfall.  Snort had to decide if he was going to save Kit Kat or save the triplets…