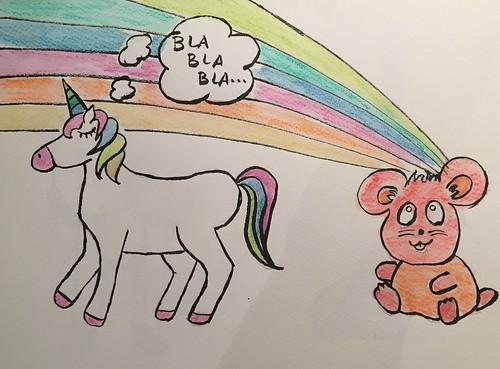 Once upon a time, Cupcake was playing with her best friend Coco the rainbow hamster.

They were riding a rainbow and having great fun.

All of a sudden, they fell off the rainbow.

“Aaaaahhhhhh, help!” said Coco, after landing on the side of a big, endless hole in the ground.

Meanwhile, Cupcake landed far away, outside the Golden Cheese Castle where lots of Cheese Guards were patrolling.

An elephant emerged from the woods beside the castle and said to Cupcake, “I’ll bring you home.”

At the same time, the Cheese Monster was coming from the castle towards them.

Cupcake yelled, “My greatest fear is coming true!” and burst into tears.

Coco heard Cupcake yelling in the distance and started running towards her friend.

One brave guard ran toward the hamster and said “HIIIII YAAAAH” and kung-fu kicked Coco, but Coco swung around and swallowed him in one gulp.

The Cheese Monster was making his way towards Cupcake and he grabbed her.

“I’ve got you now!” he cried, just as the elephant charged towards him and stamped on the Cheese Monster.

A human was walking nearby and saw all this taking place.  She was shocked by what she saw. She approached Cupcake…