Cynic the Inic and His Dabbing Adventure 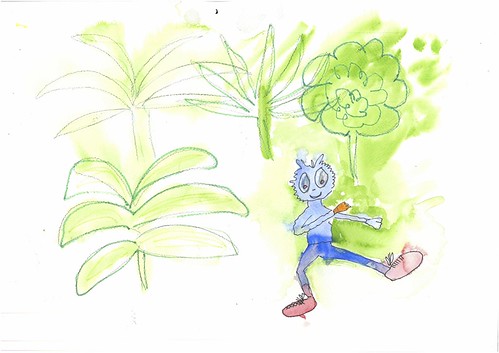 Cynic the Inic was a dab monster in the jungle. His fur was blue. The jungle was terrible and scary.

He lived there with all of his friends. Cynic’s best friend was Spooner Man. Spooner Man was half spoon and half spider.

One day, Cynic and Spooner decided to go to the cinema.

Spooner Man left his seat but never came back! Cynic the Inic got really suspicious and went around looking for Spooner Man. His phone started buzzing and he saw he had a Whatsapp message from an private number.

“I have your friend. In return for him, I want your dab powers,” the message said.

Cynic the Inic was worried. He rolled up into a ball and he started thinking about a plan. He had a suspicion that his mortal enemy, the Evil Caveman, had taken his friend.

On their way to Dab Land, Cynic the Inic got another message that said: “Please do not come at 5 o’clock. I am having my dinner then.” 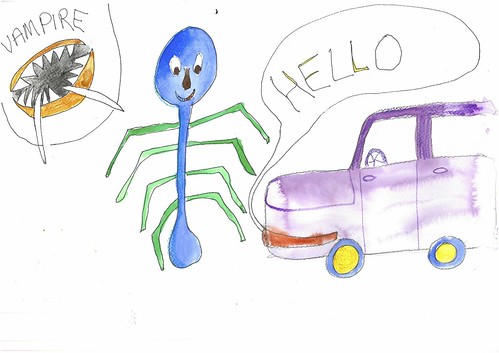 “I hope the dinner isn’t Spooner Man,” said Cynic the Inic to himself. “Believe me, he won’t taste nice.”

They arrived at the Evil Caveman’s mansion, which was guarded by the vampire Jimmy. Cynic the Inic heard Spooner Man saying, “Please don’t eat me! I don’t think I taste that nice...”

Cynic the Inic knew he had to distract the vampire, so he showed the vampire his dance moves.

Tickles the Car also beeped so Cynic could sneak inside the cave mansion. Luckily, there was garlic inside the car and the vampire was so scared that he fell to the ground and melted.

Meanwhile, Spooner Man was still trapped inside a cage in the cave. Cynic the Inic crept up slowly towards him...