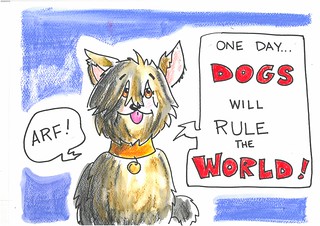 Once there was a Yorkshire Terrier named Scruffy.

His best friend was Joe who was secretly a dog-catcher, but Scruffy didn’t know that.

One day, they were going outside and Spiky the Magic Tiger was waiting for them.

“What is he doing in my yard?!” Scruffy yelled.

The tiger came closer and tried to scratch him. 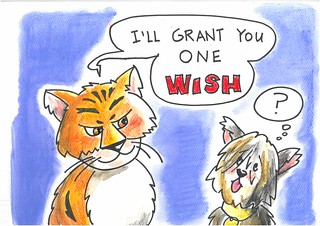 “Ugh, I just wish everyone would turn into dogs. That way we could all get along,” sighed Scruffy.

Spiky then said, “Well, I can give you one wish.”

Little did Scruffy know, the tiger had set him up to fail. Spiky was going to make him waste his wish by making Scruffy mess up his words.”

Joe then said, “Don’t trust Spiky. He’s just setting you up.” Scruffy didn’t believe him because he wanted all the people to turn into dogs so badly.

Later on that day, Joe told to Scruffy that he was going home, but really he was going to meet Spiky to set up a plan to trap Scruffy...