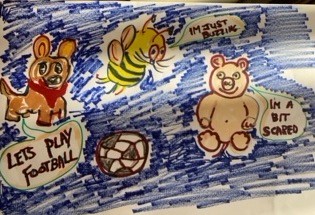 Once upon a time there was a nice white dog who liked to play football. His name was Danny Dog and his best friend was called George the Pig.

Danny Dog and George the Pig walked through the forest where they bumped into Bobby the hungry wolf.

Danny Dog was afraid of Bobby the wolf because he might eat him. 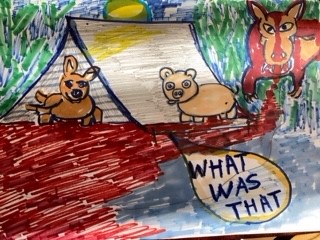 “Why are we in the forest?” asked Danny Dog.

And Danny Dog was afraid to camp at night because of the hungry wolf.

They were very excited for the roasted marshmallows and they also couldn’t wait to make s’mores.

“Do you want to play some football, George?” asked Danny Dog. 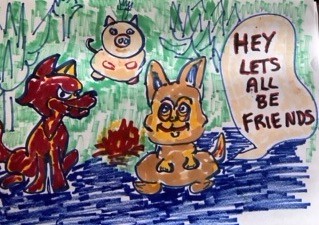 Danny Dog and George the Pig went to sleep and they snored very loudly.

Danny heard a noise while he was sleeping, so he went outside and started kicking the ball. 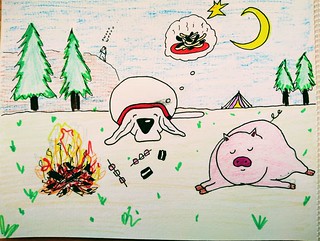 But he kicked the ball too far and it went into Bobby the hungry wolf’s home.

When Bobby the Wolf woke up, he got hit in the face with a football and started howling.

I’m going to eat whoever threw that ball!” howled Bobby the hungry wolf.