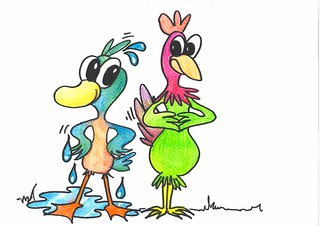 Once there was a duck named Declan who lived in a pond. He had twenty one brothers and sisters.

Declan was scared of grass and had an injured wing, so he lived in the water and never left the pond.

One day he saw Jeff the chicken and asked him to be friends.

“Yeah! Do you wanna eat some lamb wings?” asked Jeff. “There’s a path over there made of trampolines so you don’t have to stand on the grass. Be careful, though, you might bounce on the grass.”

There was a bouncy fence on the side of the trampoline path. Declan bounced from one side to the other. He nearly fell onto the grass but Jeff the chicken caught him and threw him back on. 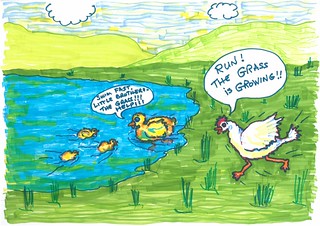 They kept going on and the trampoline path ended at the pet shop.

The shop was painted orange and there were dragons, a golden retreiver, lizards, dinosaurs, flying pigs, lambs, and minature schnausers all for sale in the shop.

This shop was five feet tall but really, really long.

The dinsouars were kept in huge cages outside and were fed marshmallows and drank out of a chocolate fountain.

Jojo was the owner of the pet shop and he was really mean and old. When he talked, he fell over.

“Hey, can we have a minature schnauser?” asked Jeff and Declan.

“Get lost!” said Jojo then he fell over. 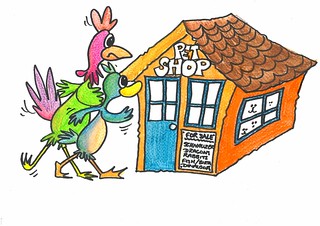 When Jojo was on the ground, Jeff and Declan took the schnauser and put a few euros on the counter.

They left the shop and bounced back home toward the pond. Jojo then decided to set his dragon free to get the schnauser back.

He used his walking stick to get himself back up, passed the keys to his pet alien who unlocked the dragon cage.

“Yes! He’s free!” Jojo shouted and he fell over.

The dragon headed toward the pond to get the minautre schnauser off Jeff and Declan.

“Come back here ya little chicken and ya little duckling!” yelled the dragon...