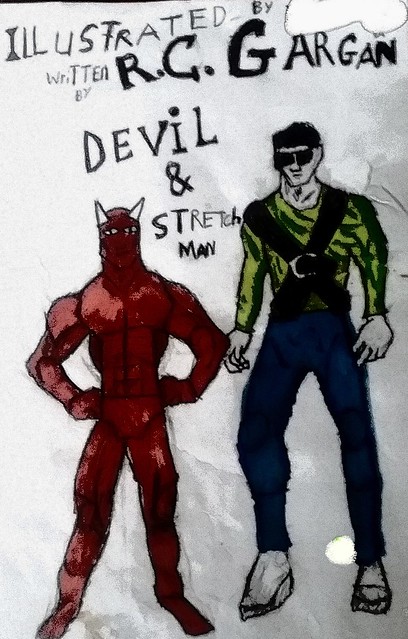 Sam and Dan were working in a nuclear power plant in Dublin. They didn’t really like their jobs there but they had a roof over their heads so they weren’t too unhappy.

One day, Sam was just working when he found something out of place, but what was it? Dan’s birthday? No, that was yesterday.

“I was getting all worked up about nothing,” Sam said under his breath.

“HE’S ABOUT TO FALL INTO THE NUCLEAR WASTE!!! DAN!” Sam screamed but Dan had his new Ear-Pods in that he had got for his birthday yesterday. He was listening song called “Dan” so Sam’s scream sounded like was in the song.

“I’VE GOT TO GO IN THERE AFTER HIM” Sam said aloud.

They went through a metal tube and…....   They became

“Yeah, what happened to you?” Dan asked.

Sam looked like a devil. Dan looked like a stretched-out human. He had a criss-cross on his green T-shirt and black sunglasses. You couldn’t see through his glasses, so you can’t see his pale blue eyes.

Sam was now “Devil” - he was a human that looked like a devil. That was because of his amazing superhero suit: it was red and tight so it was pulled back so you could see his muscles. He didn’t normally have muscles - it was a side effect. Sam’s mask was like a devil’s head. It had little holes to breathe and see and it also it had sharp horns that were silver and scary.

“What should we do? Devil asked.

“Well what do you what to do?” Stretch man answered.

“Why do you want to shout?” asked Devil.

“Because…” so they both at the same time shouted …

Then Stretch Man noticed something in the corner of his eye. “Hey Devil, look over there, there’s a door over!”

“The name Devil, Stretch Man,” said Devil while he winked at Stretch Man.

“Ohhh, now you have a name for me! Stretch Man, I like that name,” replied Stretch Man.

“Okay, let’s go through that door, now” said Devil, motioning to Stretch Man to come with him.

There was two of everything: two jets, two busses, two arcade games WITH THEIR NAME ON IT!!!!!! Every-superheroes-thing!

“Hey look, Devil,” said Stretch Man. “There’s a big screen over there. I wonder if we could set up the Next-box,” he added quickly.

The news came on. “There’s a robbery at Churchtions Bank. Now some say they’ve gone to the new circus and the new game predicted the future. Also, they’ve said the most unlikely thing is a superhero is coming. That’s the news,” said the news man.

“We have to go,” said Stretch Man.

“Well, what are we waiting for?” said Devil. They ran out the door, they ran back in the door. “We need to go in the Devil jet”. 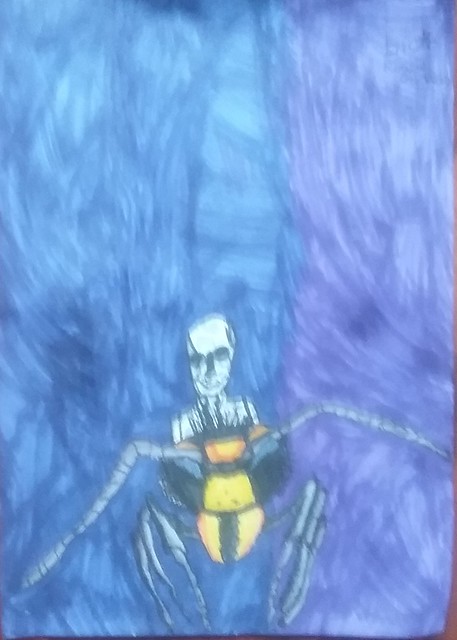 They made it there. There were guards everywhere to look. In the centre, there was what looked like a blimp with a Bumblebee logo on the balloon bit.

Well, it was because of the invisible lasers. Again, they strode through them. They didn’t talk at all, but then at 9:30 Devil began to hum a song.

“Why don’t we ever talk during work?” Stretch Man asked.

Devil ducked as a bullet fired and answered “Eh, probably because we never were super heroes before,” said Devil.

Dr Bumblebee was a ginormous bee, 6 feet 2 inches. He had the iconic yellow & black stripes and he had two short wings. Bones was probably what you expected a living skeleton. Both villains.

The door swung open…   IT WAS DEVIL AND STRETCH MAN HERE TO SAVE THE DAY!!!!

“Uh oh” said Dr Bumblebee, grabbing onto Bones and swinging round, facing the window. He flew out the window only to be met with a baker’s dozen of Guards. Dr Bumblebee rummaged through his pocket and then finally took something out…….   A WHITE FLAG!!!!!

“This is just the start, Devil” said Stretch Man.

This isn’t the END……