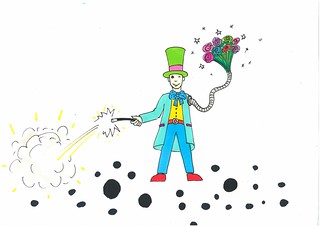 Once upon a time in Magicville, Mr Rainbow Magic Man was making rainbows.

He saw Fionnuala Cloud-Woman flying towards him making sadness clouds.

She seemed even more miserable than ever and was angrily dropping her green minion monkeys. 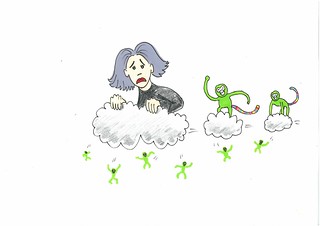 Mr Rainbow Magic Man ran over to Steve the stegosaurus and said, “Quick, we need to help her!”

“Should I throw tea in her face? I’ll get the best china,” Steve replied

“I have a better idea. Why don’t I ride on your back?” suggested Mr Rainbow Magic Man. 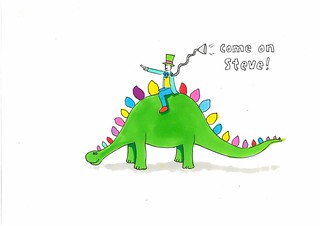 Steve said, “No, you get in your Rainbowmobile. I’ll spray tea to get rid of the minion monkeys that you’re so afraid of.”

Suddenly, all Fionnuala Cloud-Woman’s green monkeys came into the house through the windows and the doors.