Skip to main content
Home Stories The Dog, the Duck and the Deli Counter

The Dog, the Duck and the Deli Counter 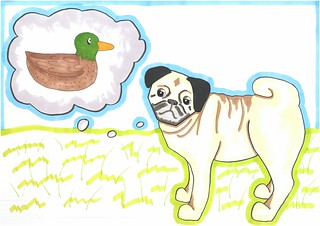 One day, one dog wanted one duck. That dog’s name was Doug the Pug.

Doug was walking his best friend, Mr. Ming Ming, on Mr. Ming Ming’s new, pink leash, on planet H’trae where everything isn’t as it might seem.

They were setting out on an adventure to find a duck. Doug the Pug was telling Mr. Ming Ming that the duck they found would have to be named Roger or go back in the pond.
“What a name that is!” barked Mr. Ming Ming.

So off they went to the pond where Doug set eyes on a beautiful creature—it was Roger the Duck. 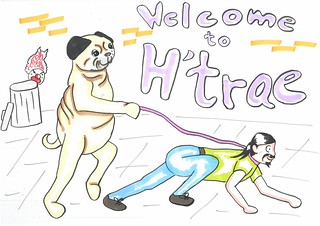 Then Mr. Ming Ming yelped. He saw a clown by the bin, looking for chicken fillet rolls.

Doug and Mr. Ming Ming backed up in fear at the sight of his curly red hair in the shape of a cat.

They ran as fast they could back to their house, to arm themselves with tin foil and pots and pans.

“I know what we can do. We can bribe the clown with chicken fillet rolls,” said Doug.

They made their way to the nearest shop to find that the deli counter was closed. They went to other shops, but the whole town was out of chicken fillet rolls…