Doug and Timmy go to Vegas 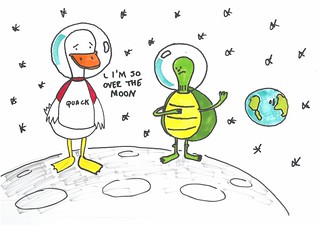 St Fiachra’s Senior National School, Beaumont, 6th Class, 23 September 2015
Doug the Duck wanted to go to Las Vegas. The only way he can get there is to fly himself. He wanted to bring his best friend, Timmy the Turtle, but he couldn’t carry him with his webbed feet.

Doug the Duck lived in a park on the moon with Timmy.

They had lived there happily since the Apollo 11 landings, but Doug the Duck was tired of living on the moon.

Timmy said, “I love living here. Why do you want to go to Las Vegas?” 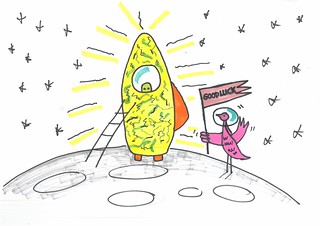 “But why would you want to leave here? Our family is here and we have loads of moon cheese,” said Timmy. “How are you going to get there anyway?”

Doug replied, “We could build a spaceship out of moon cheese.” 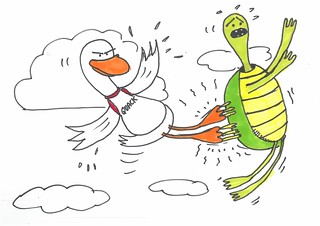 Timmy didn’t think that was a very good idea, but he helped Doug anyway.

Seventeen hours later, the ship was ready. It was tall, skinny, and made of stinky, mouldy, blue cheese.

Doug was already leaving, and Timmy jumped onto the back of the ship at the last minute without Doug noticing.

The ship started to melt when it hit the Earth’s atmosphere. Doug jumped out of the emergency exit while Timmy fell off.

As Doug was falling, he realised he could either lose his friend or fly. The only thing was he was afraid of flying.

Timmy went into his shell as they were falling. Doug caught him with his sticky, cheesy, feet, and then they landed...