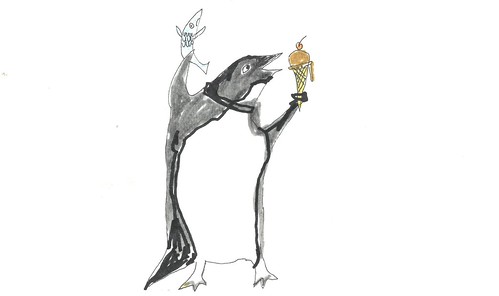 Emily the penguin lived in Dublin Zoo. She was happy living with her friends and family.

Her best friend was a sea lion called Rosilla.

Emily was good at football and swimming and she loved to paint too.

One day, Emily was talking to Rosilla.

“I don’t like it when the monkeys say OO-OO-AA-AA. 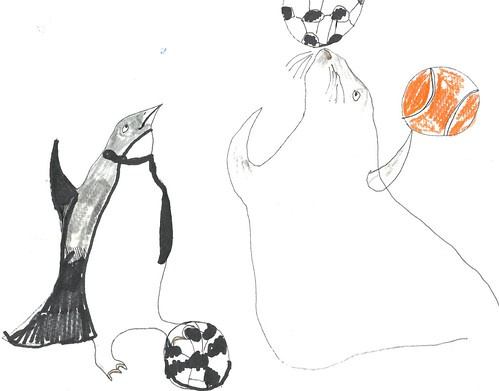 Sometimes it’s scary!” said Emily. She pretended to walk like a monkey.

Rosilla said, “I don’t like the way they stare.”

Every day, Emily and Rosilla saw the monkeys swinging through the trees.

Sometimes they even smoked cigarettes.

Emily and Rosilla were afraid of them.

All the penguins loved to play football.

The sea lions didn’t play football, but they were very good at basketball.

On this day, the penguins were playing football and the monkeys were swinging above them smoking their cigarettes.

Emily was too afraid to play in the match because of the monkeys. 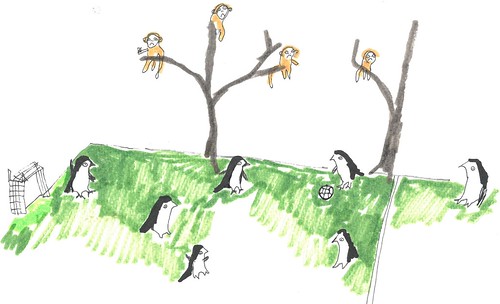 ​Rosilla had gone home because of the monkeys.

Richard the Penguin was playing in the match and Emily was watching him.

Richard played football for Dublin, but Emily’s dream was to play for Brazil in the Word Cup.

“Come on, Emily!” said Richard. “Your dress and your hair are lovely. Don’t you want to play football?”

Emily decided to be brave and play in the match…