Skip to main content
Home Stories Duke and the Rollercoaster

Duke and the Rollercoaster 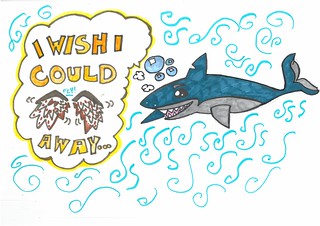 Duke the Shark was playing in his garden. He was with his friend Foamy the Swordfish.

They were playing chasing, and then Figeo the Clownfish came along, swimming and jumping.

Figeo said, “I went to the Amazing Underwater Sea Creature Carnival and saw a big rollercoaster.”

“I really want to go on the rollercoaster, but I’m not allowed,” said Duke.
“Is it a rollercoaster that goes out of the water?” asked Foamy. 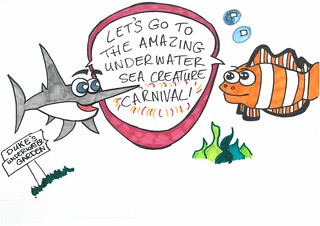 They all decided to go to the carnival. When they got there, it was closed! They decided to sneak in and start the rollercoaster.

Duke wanted to get off because it was going up to the surface. He couldn’t look, he was really scared.

When it got up to the surface, Duke tried to fly, and it worked!

Figeo nearly fell off, but Duke caught him and saved him. But then Duke realised he couldn’t breathe...