Eddie The Octopus and The Flying Pair of Glasses 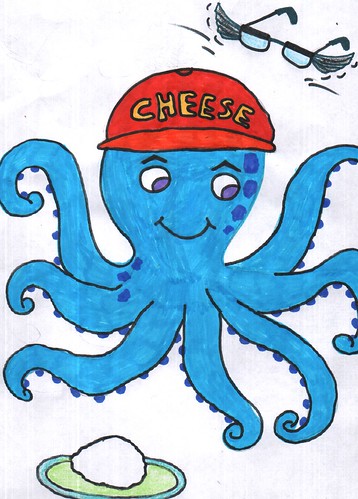 Eddie the Octopus lives on land  and is obsessed with cheese.

His favourite cheese is mozzarella and he wears a red cap that has a picture of cheese on it.

His greatest wish is to live on an island made of all the kinds of cheeses.

His greatest fear is the Mouldy Cheese Monster.

His best friend is a flying pair of glasses called Jester.

One day Eddie the Octopus and his best friend Jester the flying pair of glasses were walking in the woods and came across a wizard called Jerry.

They asked the wizard “can you make pets out of thin air?”

“No, said Jerry, “but I can make cheese islands.

But, there is a catch!  For the island will always be swarmed and infested by bees!!!”

Eddie says “ I don’t care because I like bees”

“But one more thing” said the wizard, “there is also a mouldy cheese monster.” Then Eddie says, “ no, that’s my worst fear”

Jerry the wizard said “ don’t worry, it will only happen if you wake him up.”

By the way, the cheese island is in Spain.