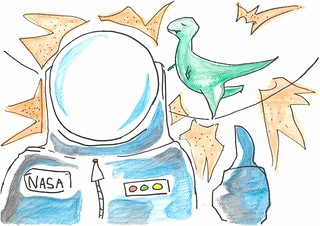 Once upon a time, Elliott the Astronaut met an acrobatic t-rex. Elliott was playing hurling and he hit the t-rex in the forehead with the sliotar. The t-rex was dazed. He said “I am going to kill you!” in a quiet squeaky voice. “Only messing, be friends with me.”
Elliott said, “I’m sorry for hitting the sliotar off your head. Are you playing here as well?”
“Yeah, I’m just on the way home from the circus. I work there as an acrobat,” the t-rex replied.
Elliott asked the t-rex if they wanted to hang out together. They decided to go into town to do a bit of shopping. Elliott’s greatest dream was to drive a car. His favourite was a Bugatti Veyron.

The arrived at a car lot called Dealz-on-Wheelz. Jeff the salesman, a Gordon Ramsey lookalike, came out to meet the two friends.
“What car are you looking for?” Jeff asked.
“I’m looking for a Bugatti Veyron,” said Elliott.
He was so excited he could barely speak. He was like a kid in a candy store.
“Yes, let me show you our collection of cars,” said Jeff, bringing them into the showroom. 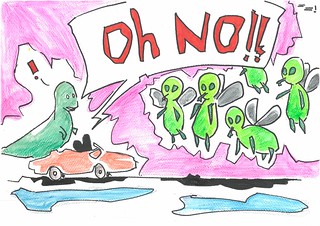 Meanwhile the acrobatic t-rex was jumping over cars causing havoc. Jeff the salesman started to get really angry. He went red in the face and started grinding his teeth. He shook his fist at the t-rex and said, “Get away from my cars you nuisance! If you break them, you pay for them!”

Jeff decided to take Elliott on a test drive and leave the dinosaur behind. They drove on the highway to test out the speed and brakes on the car. Elliott was so excited, he felt like he was in Heaven. The only thing missing was his buddy, the t-rex.

As they were driving, Elliott started hearing weird sounds. It was gibberish - “bwakah bwakah bwakah.” It sounded like Pacman gobbling dots.

They kept driving but the sound got louder and louder. They knew something was following them. Suddenly something sneaked up behind Jeff and Elliott. Elliott looked in the mirror and, to his horror, saw five alien insects behind him. Five more then crept up in front of him.

Elliott was scared. At first he thought it was his mind playing tricks on him and he was imagining it. He slammed on the brakes and, by coincidence, they were back at Dealz-on-Wheelz. These alien insects were Elliott’s greatest fear – he knew they could suck blood and were extremely dangerous.

The acrobatic t-rex had been competing against another customer in the car lot to see who could do the most somersaults. He heard the noise of brakes and the whirring of the wheels, and looked up to see Jeff and Elliott running from alien insects. The insects were goofy looking. They looked like superbugs. They were green and black with big slimy eyes. “We can see you,” they said in a creepy voice that sounded like they had inhaled helium.