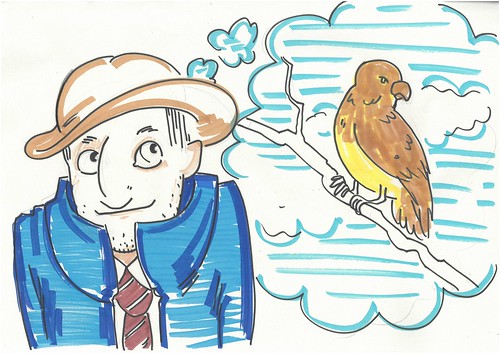 Stephen the Detective was sitting on the couch eating a slice of toast. He was also hiding inside because there were seagulls in the front garden.

The seagulls were looking in the window because Stephen was eating a slice of toast.

Stephen was thinking about why he was afraid of seagulls. One day he had been walking in a park with a slice of toast and the seagulls attacked him and stole the toast!

Stephen realised that he had to go to work and therefore had to go outside to face the seagulls. He also had to drop his daughter off to his father.

His dad was really sick and the daughter had to take care of him. 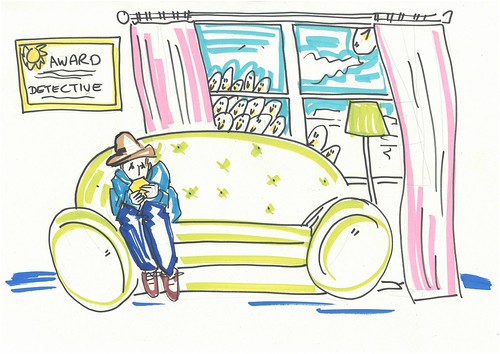 Suddenly, a seagull broke through the window of his car! Stephen was driving to work when all of a sudden a seagull crashed into his wing mirror and knocked it off.

While Stephen was distracted, another seagull flew in and stole his slice of toast. When all the seagulls flew back out of the car he heard on the radio:

“Buy five hawks and get one half price from Mrs Price’s today!”

Stephen drove to Mrs Price’s to buy a hawk. As he was about to walk into the shop, he bumped into Gerald his best friend.

Gerald had the same idea and he bought six hawks.

Stephen thought in his head that he didn’t have enough to take care of his dad and his daughter, so he was happy to be given a free hawk. 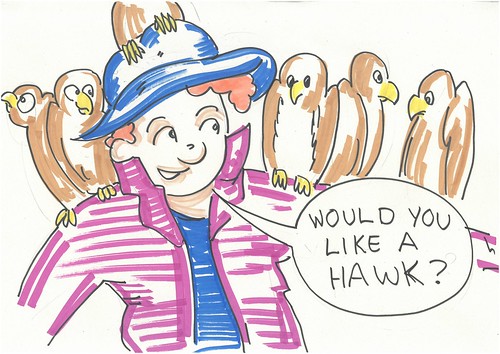 Suddenly, the hawks shot off, carrying Stephen and Gerald with them to work.

The hawks accidently let go of them in front of their office  and they fell into the community fountain, which was filled with money.

Since Stephen was desperate for money, he filled his pockets with the change.

After that, they were soaking and so they went into work and dressed in suspects’ clothes and were mistaken for suspects by the Big Boss!

Stephen and Gerald ran away because the Big Boss was there and might suspect them.

They turned a corner to the bank and they saw the real suspects wearing the same clothes walking into the bank.

They walked in the bank with the suspect suspecting that they could catch them without them noticing...